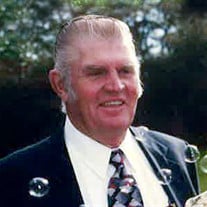 A Memorial Service will be held at 11:00 a.m., Saturday, November 16, 2019 at Our Saviour’s Lutheran Church in Sebeka, MN. Interment Services with Military Honors will be held at Red Eye Cemetery, Sebeka, MN immediately following the service. Vilho O. Luukkonen age 83 of Sebeka, MN died Sunday, October 27, 2019 at Providence Villa Assisted Living in Sebeka under the care of Hospice of Red River Valley, with his daughter by his side. Vilho was born to John and Aune (Johnson) Luukkonen on April 22, 1936. He was delivered by midwife in the homestead northwest of Sebeka in Red Eye Township, Wadena County, MN. Vilho grew up farming with his extended Finnish family. He walked to Country School District 26 where he learned English. In 1946, the family moved down the road to the Luukkonen homeplace.  After 8th grade, country school closed; he attended Sebeka High School until 10th grade, when he left home to work potato fields by hand in North Dakota. Vilho returned home to farm, then went to Aurora, MN to work in the open pit mines. At age 22 he was drafted into the Army. He was a cook in the service and was stationed in Colorado, California and then Connecticut where he met Ethel. They were married September 24, 1960 in Ansonia, CT, then made their home on a farm west of the homestead. They were blessed with three sons and a daughter. In 1975 they moved to the homeplace. Vilho worked hard farming to provide for his family and he drove school bus for Sebeka Public Schools for over 32 years. Vilho loved his family, he always said,” Had a good wife and a good life.” He enjoyed fishing, cooking, visiting, and singing, especially old time gospel. Vilho is survived by wife Ethel (Watrous) of 59 years; his sons Duane “Dob” and James Luukkonen both of Sebeka; daughter Beth (Daniel A.) Kern of Wadena. Granddaughter Hope Dumpprope of Minneapolis, MN. Grandson Jake Luukkonen of Minneapolis, MN; step-grandsons Craig Little of Hubertus, WI, Michael Little of Berthold, ND, Thomas Craig of Sebeka, MN. Along with the grandchildren his son David helped raise: Jason (Angie) Vargo of Sebeka, Samantha (Dyren) Parvi of Sebring, Florida, Justin (Erika) Vargo of Brainerd, MN, Randi Vargo of Rogers, MN. Brother Roy (JoAnn) Luukkonen of Brainerd and sister Linda Wurm of Nevis, MN and numerous nieces and nephews. He was preceded in death by his parents, John and Aune Luukkonen of Sebeka; In-laws Albert and Edith Watrous of Ansonia, CT; Sister-in-law Marlene & Brother-in-law Steve Wallick of Naugatuck, CT; Brother-in-law Gary Wurm of Cedar, MN; daughter-in-law Susan Anderson Craig Luukkonen of Sebeka and son David Luukkonen of Sebeka.

The family of Vilho "Luke" Luukkonen created this Life Tributes page to make it easy to share your memories.

Send flowers to the Luukkonen family.