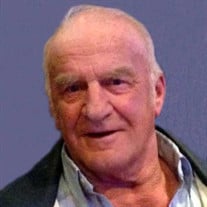 The Mass of Christian Burial for Virgil Fah, of Hewitt, will be celebrated at 11:00 a.m. on Friday, November 6, at St. Joseph’s Catholic Church in Bertha, with Father Aaron Kuhn as celebrant. Visitation with family and friends will be held at the Domian-Anderson Chapel in Bertha on Thursday, November 5, from 6:00 until 8:00 p.m. with Parish Prayers at 6:00 p.m. Visitation will resume at the church on Friday from 9:30 a.m. until the time of the Mass. Virgil, age 80, passed away with family at his side on October 29, 2020, at his home in Hewitt, while under the care of Hospice of the Red River Valley. Virgil was born to Emil and Katherine (Kraft) Fah on May 7, 1940, in Southam, ND. He worked at Northern Co-Op butter plant until they closed, then transferred to Cenex as a truck driver delivering fertilizer and grinding feed throughout central MN. On October 21, 1961, Virgil was united in marriage with Catherine Baumgartner. Virgil was a dairy farmer most of his life and always was willing to lend a helping hand to his friends and neighbors. He also enjoyed tinkering on cars and watching stock car races, especially as part of his son's, and later his grandson's pit crews. He was a greeter and usher at St. Joseph’s Catholic Church in Bertha for years; members will always remember him waiting in the back as they came into church. Preceding Virgil in death were his parents Emil and Katherine; son-in-law, Kevin Schwantz; siblings, twin sister Virginia (Roger) Crosgrove, Mary Weber, Anna Gedde, Emil (Margo) Fah, and Ralph Fah, and brother-in-law, Gary Wickstrom. Holding Virgil in memory are his children, Steven Fah of Wadena, Laura Schwantz of Holdingford, and Scott (Darlene) Fah of Hewitt; 6 grandchildren, 8 great-grandchildren, along with siblings Irene (Lawrence) Johnson and Ethel Wickstrom, along with many nieces, nephews and cousins. Honorary pallbearers will be his great-grandchildren, Trenton, Kaylee, Riley, and Elijah Paasch, Jay and Milo Sweep, Kaydin Fah and Troy Kaeter. Serving as pallbearers will be his grandchildren, Brittany Paasch, Jessica Sweep, Cassandra Schwantz, Brandon Fah, Kayla Kaeter, and Ken Fah. Burial will be at St. Joseph Catholic Cemetery, Bertha, MN. Memorials may be directed to Hospice of the Red River Valley, https://www.hrrv.org/giving-back/.

The Mass of Christian Burial for Virgil Fah, of Hewitt, will be celebrated at 11:00 a.m. on Friday, November 6, at St. Joseph&#8217;s Catholic Church in Bertha, with Father Aaron Kuhn as celebrant. Visitation with family and friends will be... View Obituary & Service Information

The family of Virgil Fah created this Life Tributes page to make it easy to share your memories.

The Mass of Christian Burial for Virgil Fah, of Hewitt, will...

Send flowers to the Fah family.