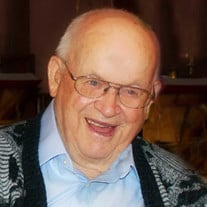 The funeral service for Walter Wiese Sr, of rural Verndale, will be held at 1:00 p.m. on Tuesday October 8, at the Balsamlund Lutheran Church in rural Verndale with Pastors Eric Clapp and Ken Losch presiding. Visitation will be held on Monday from 5:00 until 8:00 p.m. at the Domian-Anderson Chapel in Bertha, and will resume at the church on Tuesday from 11:30 a.m. until the time of the service. Walter, age 95, passed away on Friday, October 4, 2019, at the Lakewood Health System Care Center in Staples, MN. Walter was born to Herman and Amelia (Jasmer) Wiese on November 8, 1923, in Bartlett Township, near Verndale, MN. Walter married Hazel Chilberg on April 7, 1948 at Balsamlund Lutheran Church in rural Aldrich. They met at the Bertha Dance Pavilion April 29, 1945, a day Walt always remembered. They celebrated 66 wonderful years of marriage before Hazel’s passing in January 2015. They made first home on the Claus Chilberg farm north of Balsamlund Church for five and a half years before moving in 1953 to their home in rural Verndale. He met the demands of being a farmer and also worked with Carl Hallstrom doing plumbing for Hewitt Hardware. In earlier years, Walt enjoyed the outdoors sucker fishing, pheasant hunting and attending the County and State Fairs. He even built a camper for his pickup to take to the State Fair. He also found joy in playing cards and bingo. Most of all, Walt loved to get his family together! He was a member of the Mid-America Dairy Association, American Dairy Association, and the Dairy Farmers of America. He served on the Church Board and Men’s Club, was a volunteer Senior Driver, and a member of the Lions for 41 years. By 2015, Walt moved into the Lakewood Care Center where he had many friends and loved the people around him, especially the staff. He shared his big smile and fun teasing ways. He enjoyed watching and participating the nursing home activities, too. The family wants to thank all the caregivers who lovingly cared for Walt in his last years. Walter was preceded in death by his wife Hazel; his parents; son Brian; daughter Tammy; brother Elmer; sister Edna; son-in-law Ricky Riedel; grandson Ryan Bowman and granddaughter-in-law Jessica (Carlson) Wiese. Surviving Walter are his children Karen Treangen (Duane), Wally (Kathy) Wiese, Leona (Neal) Bowman, Bruce (Carol) Wiese, Sue Riedel; Mark (Cathy) Wiese and Walter Jr. (Cindy) Wiese; brothers Herman (Kathy) Wiese; sisters-in-law Betty Wiese and Marian Fuller; along with many grandchildren & great-grandchildren, nephews and nieces. Honorary pallbearers will be all of Walter’s grandchildren. Active pallbearers will be Paul Zimmerman, Joey Wiese, Justin Wiese, Jonathan Wiese, Nathan Wiese and Eli Wiese Burial will be in Balsamlund Lutheran Cemetery, rural Verndale, MN.

The funeral service for Walter Wiese Sr, of rural Verndale, will be held at 1:00 p.m. on Tuesday October 8, at the Balsamlund Lutheran Church in rural Verndale with Pastors Eric Clapp and Ken Losch presiding. Visitation will be held on Monday... View Obituary & Service Information

The family of Walter W. Wiese Sr. created this Life Tributes page to make it easy to share your memories.

The funeral service for Walter Wiese Sr, of rural Verndale, will...

Send flowers to the Wiese family.