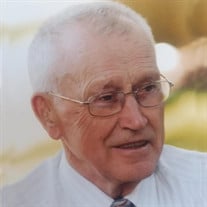 The private graveside service  for Warren “Pat” Nelson of Staples, will be held on Friday, May 14, at the Minnesota State Veterans Cemetery, Camp Ripley, near Little Falls, MN.   With family at his side, Warren “Pat” Nelson, age 90, passed away on May 4, 2021, at the Lakewood Health System Care Center in Staples MN, under the compassionate care of Lakewood Hospice.   Warren, known as Pat, was born to Albert and Agnes (Palm) Nelson on March 17, 1931, in Princeton, MN. He graduated from high school in St. Francis, MN. He joined the US Air Force in April 1951 and was honorably discharged as a Staff Sergeant in 1955. On a blind date, Warren met Carolyn Edith Cates and they were united in marriage on July 1, 1955, at the Hope Presbyterian Church in Richfield, MN.   Warren and Carolyn operated a dairy farm in St. Francis MN, where they raised their 4 daughters, 2 foster daughters and grieved the loss of their infant son.  In 1971, Staples, MN became their home where they farmed for many years and became very active members of the Alliance Church.  Warren and Carolyn retired from farming in 1997 and moved to a cozy home on their daughter’s property in Motley MN. Due to declining health they moved into The Pines in Staples in 2012, where they enjoyed the company of many special people.   Over the years, Warren belonged to the Agricultural Committee, and served his church as a very active board member and trustee. His interests included metal detecting, gardening, restoring vintage toys, and deer hunting.  He was also an avid fur trapper for over 72 years which included many fond memories of beaver trapping for numerous counties!   Preceding Warren in death were his beloved wife Carolyn (2015); parents Albert and Agnes; infant son, David; brothers; Vernal, Morris, and Ronald, sisters;  Margorie Ackerson, Dorothy Arthur, Marian Reed and Marvel Lange.   Memories of Warren will be treasured by his daughters Deb (Dave) Mennis of Benson MN, Kathy (Denny) Ulmer of Park Rapids MN, Lori (Ross) Miller of North Branch MN, and Becky (Jay) Landis of Motley MN; foster daughters Lucille Ellefson Hanson and Lauretta Ellefson Curtin; grandchildren Leah (Mennis) Montgomery, Emily (Mennis) Cummings, Sarah (Ulmer) Frieden, Anna Ulmer, Jason Miller, Darcy Miller, Zackery Weber, Ernest Weber, Amy (Miller) Waldvogel, Rachel (Landis) Aakre and Rebekah (Landis) Daly & 27 great-grandchildren and 1 great-great-grandchild; sibling Gerald Nelson; along with a host of nieces and nephews.   Honorary pallbearers will be; Dave Mennis, Denny Ulmer, Ross Miller & Jay Landis   Burial will be next to his wife in the Minnesota State Veterans Cemetery, Camp Ripley near Little Falls, MN.   Due to the COVID pandemic the family is unable to accept flowers at this private outdoor service. The family suggests memorials be directed to  the Lakewood Health System Memory Care Unit, Staples, MN. (https://www.lakewoodhealthsystem.com/about-us/foundation/donate) and specify Memory Care.

The family of Warren L. Nelson created this Life Tributes page to make it easy to share your memories.

The private graveside service&#160; for Warren “Pat” Nelson of Staples,...

Send flowers to the Nelson family.