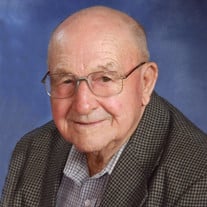 The celebration of life memorial service for Warren “Pete” Truax of Bertha, will be held at 1:00 p.m. on Thursday, June 13, at the Domian-Anderson Chapel in Bertha, with Pastor Nate Loer presiding.  Visitation with the family will be held at the chapel in Bertha on Thursday from noon until the time of the service.   Pete, age 88, passed away with his family at his side on Wednesday, June 5, 2019, at the St. Williams Living Center in Parkers Prairie, MN, with compassionate care provided by St. Williams Living Center and Knute Nelson Hospice.   Warren “Pete” Truax was born to Van and Elfine (Larson) Truax on February 7, 1931, at their home in Oak Valley Township, Ottertail County, MN. He grew up on the farm and by February 1952, was drafted into the US Army where he served two years as a private in the signal corps during the Korean conflict. While on-leave, Pete was united in marriage with Ramona Eloise Heuer on August 2, 1952. He spent most of his working years as a dairy farmer in Bertha MN. He sold his cows and owned and operated Sinclair Gas Station in Bertha for a few years but later went back to dairy farming. Pete had a quick wit and an easy smile. He was a great story teller. He loved spending time with family, his cars, coffee time, playing cards, watching the Twins and giving every player a nickname. Pete and Mona spent 20 years in Apache Junction, AZ, where they continued to work and play cards, and returned to Bertha in 2002.   Pete was preceded in death by his wife Ramona on May 14, 2016; his parents, Van and Elfine; brothers, Stanley, Robert, (Ruth), William, (Clarice), David; and sister Gloria Jean (Lawrence) Rach. Surviving Pete are his daughters, Connie (Steve) Schwantz, Karen (Eric) Amundson, Susan Kephart (Monte Quarve) and Cindy (Mike) Muzetras; 12 grandchildren, Krista (Brent) Gundberg, Heidi (Joel) Peterson, Craig (Jennifer) Schwantz, Leah (Chad) Smith, Evan (Melissa) Amundson, John (Julia) Amundson, Lindsay (Jayme) George, Kevin (Anne) Kephart, Ryan (Heather) Kephart, Kayla Kephart, Zoe Muzetras, and Alec Muzetras; 23 great grandchildren; along with sisters-in-law, Lorraine Truax and Carolyn Truax.   Burial will be in Zion Cemetery, Bertha, MN. In lieu of flowers, memorials may be given to Lakewood Health System Foundation Hospice, Knute Nelson Foundation Hospice, or St. Williams Living Center, Parkers Prairie, MN.

The celebration of life memorial service for Warren &#8220;Pete&#8221; Truax of Bertha, will be held at 1:00 p.m. on Thursday, June 13, at the Domian-Anderson Chapel in Bertha, with Pastor Nate Loer presiding.  Visitation with the family will... View Obituary & Service Information

The family of Warren "Pete" Truax created this Life Tributes page to make it easy to share your memories.

The celebration of life memorial service for Warren “Pete” Truax...

Send flowers to the Truax family.