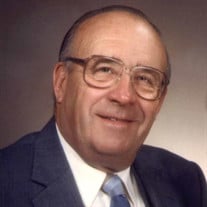 The Mass of Christian Burial for Wilbur Desrocher of Verndale will be celebrated at 3:00 PM on Thursday, September 30, 2021 at St. Frederick's Catholic Church in Verndale with Fr. Gabriel Walz as celebrant. Please Note: Friends may visit with... View Obituary & Service Information

The family of Wilbur Desrocher created this Life Tributes page to make it easy to share your memories.

The Mass of Christian Burial for Wilbur Desrocher of Verndale...

Send flowers to the Desrocher family.