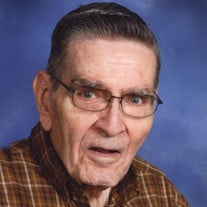 The funeral service for  William “Bill” Jacobson, of Pelican Rapids and formerly of Verndale, will be held at 2:00 p.m. on Monday, October 29, at the Verndale Alliance Church with Pastor Tony Stanley officiating. Visitation will be held at the church on Monday from 12:30 p.m. until the time of the service.      William, age 87, passed away on Monday, October 22, 2018, with family by his side at Pelican Valley Care Center. Hospice services provided by LB Hospice in Fergus Falls.      William “Bill” Earl  Jacobson was born to Inez Andrews and Herbert Schuman on October 29, 1930, in Stillwater, MN, and baptized at Ascension Episcopal Church in Stillwater January 18, 1931. He lived at Sheltering Arms from 1931-1936, and with his Mom 1936 to 1937. Bill attended kindergarten and first grade at Greeley School in Stillwater and at the Owatonna State School Orphanage where he had been placed. By age eight, Bill was adopted by Carl Albert and Theresa Geraldine (Holden) Jacobson in McGregor, MN, on December 12, 1938. He graduated from McGregor High School and worked at his dad’s Standard Oil business.      Bill was united in marriage with Ruby Elizabeth Broker on December 20, 1952, in Verndale, MN. He served during the Korean Conflict in the US Navy from January 2, 1951, as a classified coder and decoder aboard the USS Mount Olympus, and returned home to his family after his honorable discharge as a 3rd Class Yeoman on October 6, 1954.      Once stateside, Bill attended college at St. Paul Bible College while working at various jobs. In 1958, he and Ruby moved to Wheaton, IL, for work at Moody Press in Chicago, IL, and in 1962 he worked as a bookkeeper for Midwestern Construction Pipe Line. By 1963 they moved to Verndale, MN where he worked for the 1st National Bank, and later took a Cashier position at the 1st National Bank in Wadena (1965-77). It was then that he purchased the Wadena Tri-County Ambulance Service which operated until 1989.  Bill worked as a Verndale Police officer and volunteered with the Fire Department. After selling his business he occupied his time with various positions including driving truck for Polman Transfer, security for Carr’s Marine, and working at Carr’s Convenience Store in Staples. He spent several years in Arizona where he worked at the Wal-Mart in the hardware department. After returning to Verndale he drove cars for Wadena Auto and Staples car dealerships. Even during his years in the nursing home battling Parkinson’s and dementia he still insisted he was “working security” patrolling the halls.  Bill was active at the Verndale Alliance Church and was one to participate in many community groups including Rotary Club.      Bill was preceded in death by all of his parents; wife Ruby (2013); daughter Debra Drewlow Jacobson (2015); and several half-brothers and sisters.      Bill will be remembered forever by his daughter Brenda (Daniel) Brand of Pelican Rapids; sons Mike (Louise) of Kansas City, MO, Bruce of Verndale and Bryan (Leah) of Pullman, WA; grandchildren, Joel Drewlow, Nathan (Erin) Brand, Megan (Michael) Schultz, Elizabeth Drewlow, Danielle Jacobson, Derek Jacobson, Reuben Glaser, Norah Glaser; great-grandchildren, Chloe Schultz, Ethan Schultz, Samuel Brand, Anna Brand, Alaina Schultz, Eve Brand, Sarah Brand; sister-in-law Norine Halaas; uncle Leonard Jacobson, half-brother Butch Jacobs, half-sisters Dava (Schuman) Williams, and Roberta (Schuman) Setterquist; and half-sister-in-law Darlene Schuman along with many cousins.  Bill was loved by many people and will be greatly missed.   Burial will be in Green Lawn Cemetery, Verndale, MN.

The funeral service for  William &#8220;Bill&#8221; Jacobson, of Pelican Rapids and formerly of Verndale, will be held at 2:00 p.m. on Monday, October 29, at the Verndale Alliance Church with Pastor Tony Stanley officiating. Visitation will... View Obituary & Service Information

The family of William "Bill" Jacobson created this Life Tributes page to make it easy to share your memories.

The funeral service for&#160; William “Bill” Jacobson, of Pelican...

Send flowers to the Jacobson family.