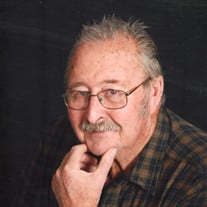 The services celebrating the life of William Fisher of Verndale will be held at 11:00 AM on Monday, December 30, 2019 at the Verndale Alliance Church with Pastor Tony Stanley presiding. Bill passed away at the age of 85 on Tuesday, December 24th at the Providence Villa in Sebeka. William “Bill” Fisher was born to Harold and Myrtle (Searcy) Fisher on March 19, 1934, at Pillager, MN. Bill moved with his family to Verndale at the age of 5. After serving in the Army, Bill bought the family farm, where he and Phyllis raised their 5 children. He was a rural mail carrier for 40 plus years. He farmed up until his passing. In July, he would be spotted out in the fields moving and baling hay. Bill was a kind man who was always willing to listen, give a helping hand and loved his grandchildren and great-grandchildren. He was a good friend to many. He was preceded in death by his wife Phyllis on May 15, 2018; his parents Harold and Myrtle; and son-in-law Mark Christianson. Bill will be lovingly missed by his children: William Lee Fisher of Alexandria, Timothy Harold (Sally) Fisher of Maple Grove, Danny Lynn (Dawn) Fisher of Verndale, Brenda Sue (Brad) Stinar of Verndale and Dean Michael (Vicky) Fisher of Blaine; 18 grandchildren and 21 great-grandchildren; and a host of neighbors and friends Honorary urnbearers will be Bill’s grandchildren: Andria, Aaron, Jordan, Landon, Laci, Tyler, Matt, Brett, Daniel, Collin, Cole, Chad, Kayla, Alexia, Kennedy, Hunter, Jerdan and Alicia; and great-grandchildren: Ethan, Chase, Noah, Olivia, Jordan, Landon, Damian, Kendall, Lilli, Madison, Tyson, Jaden, Taya, Sophia, Autumn, Alaina, Kingston, Kaylynn, Kendra, MaKenna, Dawson, Henley and Bjorn. Military Honors provided by Elmer Goche Post 3922 - Veterans of Foreign Wars. Burial will be held at a later date at Green Lawn Cemetery in Verndale, MN.

The services celebrating the life of William Fisher of Verndale will be held at 11:00 AM on Monday, December 30, 2019 at the Verndale Alliance Church with Pastor Tony Stanley presiding. Bill passed away at the age of 85 on Tuesday, December... View Obituary & Service Information

The family of William Fisher created this Life Tributes page to make it easy to share your memories.

The services celebrating the life of William Fisher of Verndale...

Send flowers to the Fisher family.