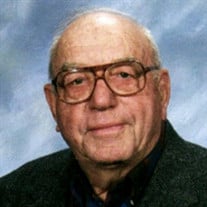 The Mass of Christian Burial for William “Bill” Kern of Blue Grass will be celebrated at 11:00 a.m. on Friday, September 1, at the St. Hubert’s Catholic Church in Blue Grass with Father Lauren Germann as celebrant. Visitation will be held on Thursday at the Johnson-Schuller Chapel in Wadena from 5:00 until 8:00 p.m. with Prayers at 6:00 and Rosary to follow. The visitation will resume at the church on Friday from 9:30 a.m. until the time of Mass. Bill, age 88, passed away on Thursday, August 24, 2017, due to an ATV accident near his home in rural Blue Grass, MN. William was born to Adam Anton and Emily Mary (Botzet) Kern on March 3, 1929 at their home in North Germany Township, Wadena County, MN. As a child he attended District 23 Country School. Bill joined the US Army in 1954 until his honorable discharge in 1956. He worked as a beef farmer with multiple jobs off the farm. When time allowed, Bill enjoyed hunting and fishing. He was very involved with politics and was an active member on the Region 5 Development Commission, the North Germany Township Board and the Wadena County Association of Townships. Bill was also a member of the Wadena VFW Post 3922 and Sebeka American Legion. He carried a strong Catholic faith and was a lifetime member of St. Hubert’s Catholic Church in Blue Grass. Bill was preceded in death by his parents Adam and Emily; brothers Clem, Ray, Ed, and Bob; and sisters Mary Kern and Hilde Uselman. He will be remembered by his sister Dolores Stoltman; sister-in-law Margaret Kern; numerous nieces and nephews; along with friends and neighbors. Honorary pallbearers will be Harlan Umland, Chuck Venzke, Ted Fischer, Ron Piepkorn, Dieter Meister, Roland Larson, Don Lubitz, and Sylvester Heltemes. Serving as pallbearers will be Dan Kern, Tom Kern, Jack Kern, Dustin Uselman, Chad Uselman, Jake Uselman, Joe Kern and Alex Mimmack. Burial will be in St. Hubert’s Catholic Cemetery, Blue Grass, MN.

The Mass of Christian Burial for William &#8220;Bill&#8221; Kern of Blue Grass will be celebrated at 11:00 a.m. on Friday, September 1, at the St. Hubert&#8217;s Catholic Church in Blue Grass with Father Lauren Germann as celebrant. Visitation... View Obituary & Service Information

The family of William H. Kern created this Life Tributes page to make it easy to share your memories.

The Mass of Christian Burial for William “Bill” Kern of Blue...